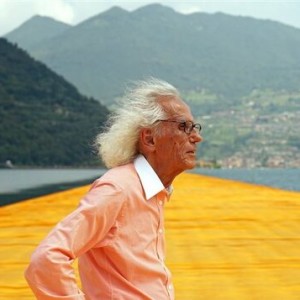 Fresh Eye has teamed up with Artcam Films and ArtMap to present yet another documentary film from the Culture Wars series with a focus on unique movements, personalities and groups that co-defined contemporary visual culture in the past century. After a film series by VALIE EXPORT and documentaries on Donna Haraway, Barbara Rubin, Joseph Beuys, Yayoi Kusama and Blue Note Records, we present the portrait of global land art icon CHRISTO Walking on Water in an exclusive preview before the official Czech premiere.

The film gives us a rare and open look behind the scenes of the late artist whose larger-than-life conceptual installations transformed iconic places around the world. Christo is a conceptual art legend to whom no idea is impossible and no dimension too megalomaniac. He wrapped the world’s monuments to make us see them in completely different contexts. He created all of his key installations with Jean-Claude, his partner in art and life, whose death in 2009 made him put his art career on hold to deal with the pain. The costly project The Floating Piers marked his challenging comeback in 2016.

Andrey Paounov’s documentary on the legend that is Christo is both a biographical portrait and an entertaining homage to the man whose obstinacy knows no limits.