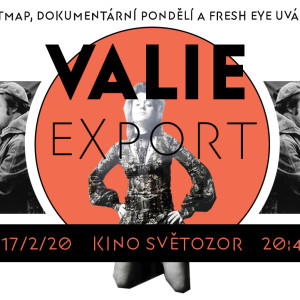 For the sixth time, Fresh Eye, Documentary Monday and ArtMap have teamed up to present a screening of short videos and performances by one of the pioneers of European feminist art VALIE EXPORT who is yet little known in the Czech Republic.

The Austrian multimedia artist, whose trademark is her daring use of her own body, brought a large dose of unexpected wit, sarcasm and criticism to Vienna’s conservative society of the late 1960s. Through public performances, photography and film, the artist ventured to openly discuss the non-respecting attitude of the society and the art world to women, who were perceived primarily as objects. Issues like the commodification of women and art were literally “sealed” by the artist using a stamp with her artistic name VALIE EXPORT which appeared on a series of photographs documenting one of her best-known performances “Action Pants: Genital Panic” (1968) among others. The program will focus on the film and performance aspects of the artist’s work and present a selection of her short films and performance recordings.

There will be an introductory performance by Czech feminist artist Lenka Klodová.

Tickets can be purchased online via Světozor Cinema.

Films included in the programme: